When it comes to election fraud, we need facts, not fact checkers 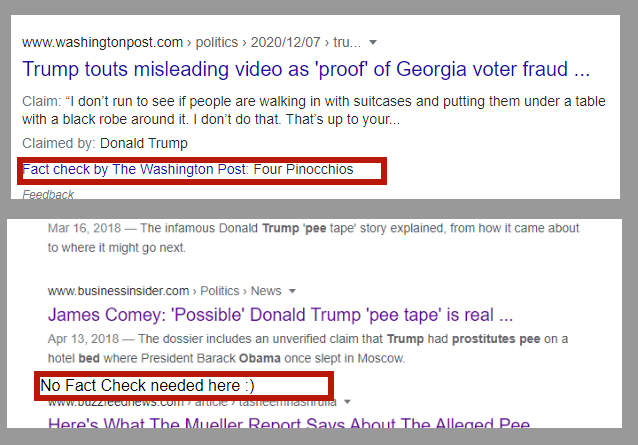 So the Washington Post did the facts then it did the fact checking. How quaint! By the way, the bottom Fact Check comment was moi.

To think that a few high-level Trump-hating dirty FBI agents could concoct with impunity an "insurance policy" that would deep six President Trump's first term in office and never be held accountable is equally perverse.

When House Democrats challenged President Trump's election win on Jan. 6, 2017, there were no articles about how they were "playing with fire" as there were several days ago when GOP Sen. Ben Sasse of Nebraska made such remarks.

More importantly there were no allegations of election fraud in the 2016 election as there are today.

But here's what's most troubling.

When I try to investigate some of the fraudulent voting claims made by President's Trump's Lawyer Rudy Giuliani, the fact checkers I come upon - in one case Reuters, a respected news organization - they cite social media posts as circulating "misinformation," not witnesses or affidavits produced as evidence by the former New York mayor.

I've watched many of the legislative hearings in Nevada, Pennsylvania, Wisconsin, Arizona and Georgia. They were fascinating, with ordinary citizens, patriots unafraid of being doxed or threatened or made fun of telling legislators what they saw on election night.

But when the fact checkers spin their narrative they don't say the claims came in the form of affidavits or even from Giuliani; they characterize them as being spouted on Facebook.

Last spring I posted a Rochester Voice story about Raven 23 on Facebook. Later in the summer I was searching on The Rochester Voice Facebook Page for an earlier post regarding an unrelated story and noticed the Raven 23 Facebook post and story link from the spring had been taken down - you guessed it - by an anonymous "fact checker." The story and link taken down was about the Congressional Justice for Warriors Caucus urging a pardon for Rochester native Evan Liberty, who finally was pardoned by President Trump last month. Most likely it was taken down because Raven 23 had been alternatively dubbed the Biden 4.

But here's the kicker. When you Google a search for the prostitute pee story, there is no fact check. Non one's giving the Steele dossier four Pinocchios.

This kind of selective fact checking should give every red-blooded American pause.

With so much at stake America should take a moment, investigate the allegations of voter fraud at the Supreme Court level and ensure that there was integrity in this election.

Remember, two years on a dirty Russian dossier. An impeachment on an anonymous whistle blower.

Why the rush? What are folks afraid of?

To watch a video in which data scientists say they have proof of systemic election fraud in Georgia click here.