When it comes to Rochester's Porchfest extravaganza, not even a virus can stop us 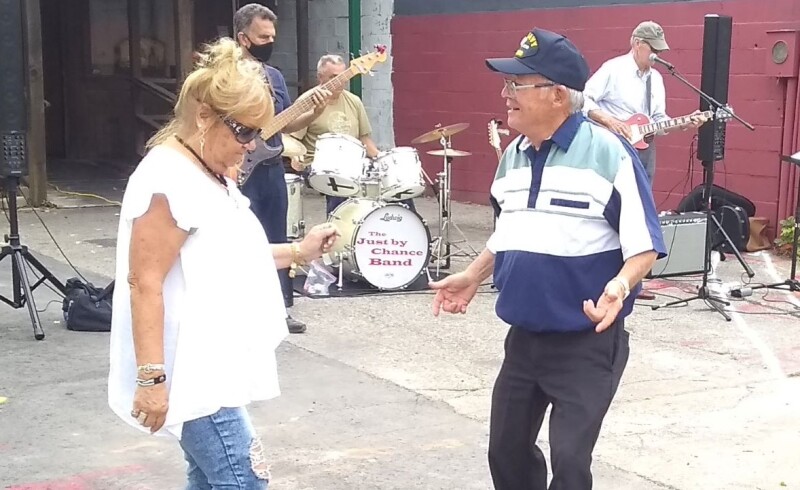 A couple dances in the street as the band Cormier and Marton belts out classic oldies at Porchfest on Sunday. (Rochester Voice photos)

ROCHESTER - Even amid a pandemic Rochester's third annual Porchfest packed 'em in.

From the Governor's Inn to Tri-City Bicycles to City Hall, some of the area's most successful bands as well as some that have still not yet been discovered played their hearts out to an appreciative crowd that danced and swayed to the beat of almost every type of musical genre imaginable.

Estimates of this year's attendance was some 1,500 throughout the day, according to Anthony Ejarque of the Rochester Opera House, which co-sponsored the event along with Rochester Performance and Arts Center.

Some 35 bands were on hand playing at dozens of venues, their 90-minute performance times staggered into three slots: Noon, 1:30 and 3 p.m.

An illustration of the vast musical mix was no clearer than in the Union Street parking lot with renowned local rockers Dancing Madly Backwards with their gear used to play out at area clubs playing to some 50 fans, while 50 yards to their south this writer played Bob Dillon, CSNY and The Band on his 40 watt, two channel Fender amp for a handful of supportive fans in his first public gig.

It should be noted that the vast majority of eventgoers showed up masked up per pandemic protocols.

Porchfest was a combined effort of the ROH and RPAC.