When pundits, celebs turn tragedy into talking points, they victimize the victims 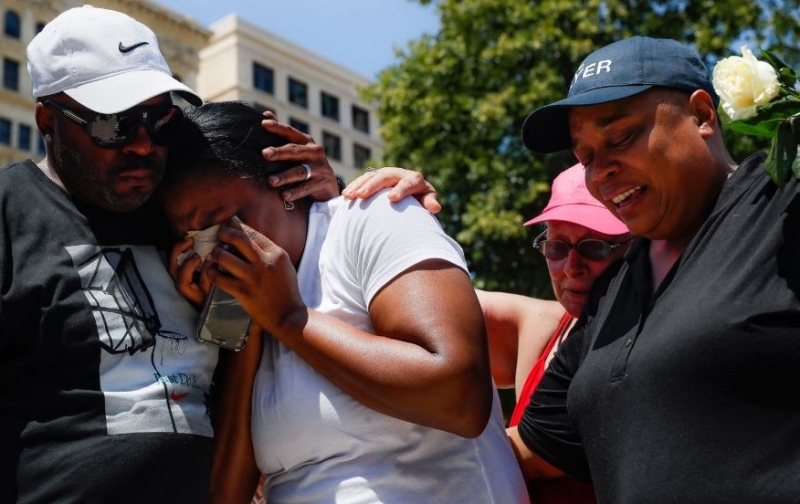 Mourners gather in Dayton at a vigil following the mass shooting. (John Minchillo/AP)

When tragic mass shootings like the two in Texas and Ohio occurred this weekend, those communities gathered together to save the wounded, comfort the families of the fallen and begin the difficult path toward healing.

Meanwhile, the so-called policy pundits, who now include actors, singers and sports stars as well as the usual media talking heads, use it for talking points to further their own career, agenda and social media cache.

Now that the presidential campaigns and news cycles know no bounds, politicians of all stripes weigh in trying to advance their electoral hopes and campaign coffers.

I doubt that anyone in El Paso or Dayton today is reading the article about actress Reese Witherspoon's demanding tougher gun laws and going "Right on, Reese. You tell em'."

They are there, suffering, in pain, and now they have to hear about some "Hollywood" star using their misery as a platform for her to advance her notion of what's right for this country.

Does Reese ever think that the parade of endless Hollywood movies that show the goriest, horrific and realistic images of human beings being dismembered might have maybe just a scintilla of culpability in the violence that pervades this nation?

How about the millionaire producers of violent and painfully realistic video games that exult in sheer violence and graphic bloodletting that some watch for the majority of their day? Are the video game makers waking up today feeling just a little queasy, maybe angst-ridden?

And for all those who enjoyed getting their political rocks off after the shooting by cursing President Trump and - yes - even blaming him for the carnage let me say this:

Did President Obama ever get legislation passed to tighten the gun laws so that the likes of Witherspoon were happy? If you look at the record, you'll find he didn't.

Yet Obama talked a good game, decrying the violence, but doing little.

Interestingly, the one anti-gun effort rule he did sign was one that required those receiving mental health disability payments be added to the FBI background check system, which is used to screen firearms buyers.

President Trump, ironically, rescinded the rule shortly after he was inaugurated. We say ironically because of his comments over the weekend that indicate he thinks mental illness is a major factor in mass shootings, with which we would agree. We would advise him to perhaps reconsider his 2017 ruling to eliminate it.

What we also advise is that when a tragedy like these two occurs, political operatives, Hollywood mavens and basement pundits should wait for the bodies to be buried and the communities to heal before screaming from the gallery to their own smug satisfaction.

Try to donate and do service rather than pillory and profit.