When you're a Rochester cop, you never know what you're gonna get going in 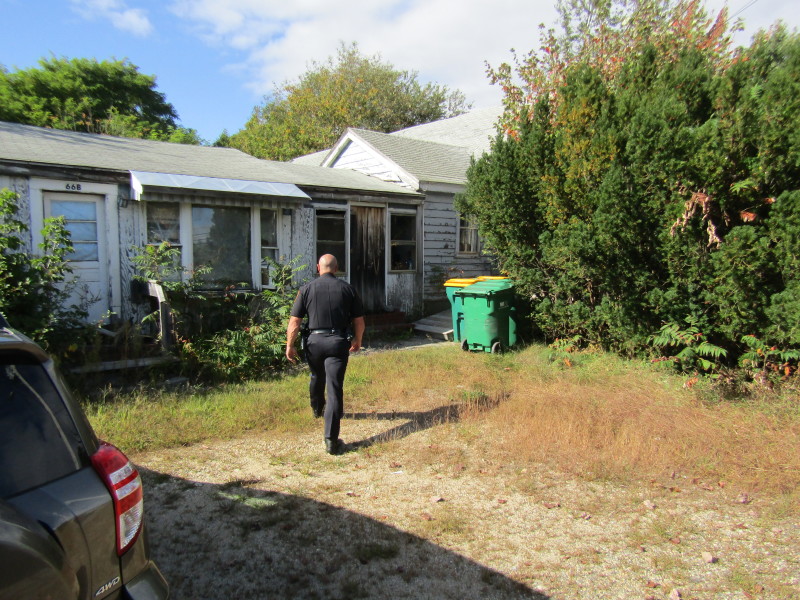 Rochester Police Officer Brandon Kimbrough heads into an unoccupied dilapidated home to confirm there are no potential threats inside. (Rochester Voice photos)

When Rochester patrol officer Brandon Kimbrough got the call at 2:55 p.m. on Wednesday to investigate an open door at an unoccupied residence on Old Milton Road, it seemed like just another routine call.

And it was, but Kimbrough probably never figured going in it could have ended up being a candidate for an episode of the Discovery channel's former hit show, "Dirty Jobs."

The dispatch alert flashed across his cruiser's Mobile Data Terminal (MDT) noting that a city assessor had come to look at the property with the owner, who hadn't lived there for years.

The assessor had been advised not to enter an unoccupied dwelling since it could be a danger if squatters or drug users had taken up residence there.

This writer was with Kimbrough on a scheduled ridealong, to get an up close and personal idea of what Rochester police are faced with every shift they work.

When we arrived at the now-dilapidated structure, Kimbrough chatted with the assessor and owner while waiting for backup since there was no telling who or what might be inside.

After waiting several minutes, Kimbrough decided to go it alone and entered the home while the three of us waited out in the bright, warm afternoon sun.

After a few minutes we actually became concerned for his safety as all three of us inched slowly to the door.

As we did, Kimbrough strode out, his head, neck and arms strewn with soot-stained cobwebs.

The assessor found him a paper towel she had in her car and Kimbrough did his best to clean off the blackened cobwebs, but after five minutes during which he described the utter filth he found inside, there was still traces on the back of his head.

"You should go find a bathroom," I said looking at the nearby Dunkin Donuts.

"Nah," he replied matter of factly. "I just got another half hour on patrol."

Ah, the vicissitudes of life.

One thing about Rochester policing, Kimbrough noted, "You never know what you're going to get."

As we left the Old Milton Road to patrol the Fairgrounds section of town he added that in many small towns or cities an officer can predict what days will be busy and what days might be slow.

Not in Rochester, he said, adding it might be due to the fairly large transient population or it could be the drugs. The point is, he said, you absolutely can't predict it.

Earlier in the day we also got a chance to ride with Patrol Supervisor Sgt. Eric Babine, who recently ended his duties as dispatch supervisor when the position went back to a civilian.

Babine was doing paperwork when I first arrived at the station around 1 p.m. He explained that our first call would be out at Amazon Park to present a lineup of subjects to a woman who had reported a hit-and-run on her vehicle.

He explained that since he was the lead investigator on the case, there were new protocols in place that prevented him from presenting the lineup photos to the victim since his voice or body language might show a predisposition to a particular subject and thus taint the evidence.

So he enlisted Officer Frank Porfido, known simply as Officer Frank around the stationhouse, to accompany us to Amazon Park to read the lineup instructions to the victim.

But first, Porfido, a school resource officer for the city's elementary schools, had an appointment to see an eight-year-old girl at a downtown business where a family member had brought her. It seems she had been "acting out" at school, even throwing a chair in the classroom, and the family member wanted Porfido to "school her" a little bit on being good in class.

To everyone's amusement, when the little girl walked into the business and saw "Officer Frank" she squealed with delight and ran to give him a big hug.

Afterwards they went outside to talk in private for a few minutes before everyone returned with smiles on their faces.

"She says she'll be good," Porfido said with a big grin as we got back in the cruiser.

Then Babine, Porfido and I traveled out to Amazon Park where I learned there was a shortcut, Quail Drive, off Route 108. Good information!

The information gleaned out at Amazon Park was not as good, however, as the female victim of the hit-and-run, clung to by a crying toddler the entire time, was unable to positively identify a suspect from the lineup.

As we left Babine said he'd probably go out again so another resident of the trailer could see if they could make a positive ID on a suspect.

Other than picking up a shoplifting packet at Ulta Beauty and giving a warning to a guy who ran a stop sign, that was that for a combined three hours of my ride-alongs with Babine and Kimbrough.

They say police work can be akin to that oft-said phrase used by military men, long-haul truckers and outfielders: "long periods of boredom punctuated by moments of terror."

I say, I'm good with boredom.

And whether they're getting dirty making sure it's safe to enter a building or chasing down a bad guy whose got a gun, they're protecting those they serve.

So, like the city of Rochester did all last week, we say "Thank you for being there!"