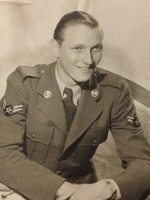 ROCHESTER - William Hayes, 79, of 105 Whitehall Road, died Wednesday, January 26, 2017, at Frisbie Memorial Hospital after a sudden illness. Born May 11, 1937 in Franklin, N.H., he was the son of Terrence and Bernice (Griffin) Hayes.
William has lived in Rochester for the last 25 years after moving from New Jersey. He was a self employed plumber who also loved to do side work to help the needy. He was a member of the American Legion Post 7 here in Rochester. William enjoyed building things, reading history books and in his younger years singing at a night club called the Sterling in Dover.
Members of his family include his wife PeggyAnn (Hanscom) Goldacker, of Dover, his children; Roy K Goldacker of Dover, William L Goldacker Jr. of Florida and Mary Traynor of Arizona, his brothers; Benny and Everett Hayes, Michael and Edward Call, his sisters; Sandra, Susan, Donna, and Sheila, eight grandchildren and three step grandchildren.