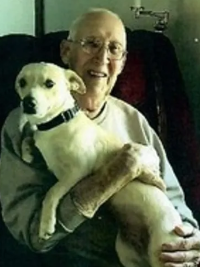 Bill graduated from Spaulding High School and joined the Navy, where he served during the Korean Conflict. He went on to work at the Navy Yard and became an architectural draftsman. He worked as an estimator at Spaulding Fiber until he retired.

He enjoyed golf, bowling, making puzzles, and dogs. He was known for his silly sense of humor and enjoyed making people laugh. He was a faithful member of Hope Community Church.

He is survived by his wife of 29 years, Louise (Shaw), his daughters and their spouses, Karyn Hatfield and Timothy, and Lynn Chick and Bruce, and his sisters Gloria Buttrick and June Chase.

He also leaves behind his stepchildren and their spouses, Robin Gaeb and Jack, Ford "Pete" Shaw and Dede, Kevin Shaw and Keren, Todd Shaw and Shannon Shaw, and several grandchildren, great-grandchildren, nieces and nephews.

He is predeceased by his sister Nancy Gray, brothers Robert and Kenneth, and his stepson Brian "Bucky" Shaw.