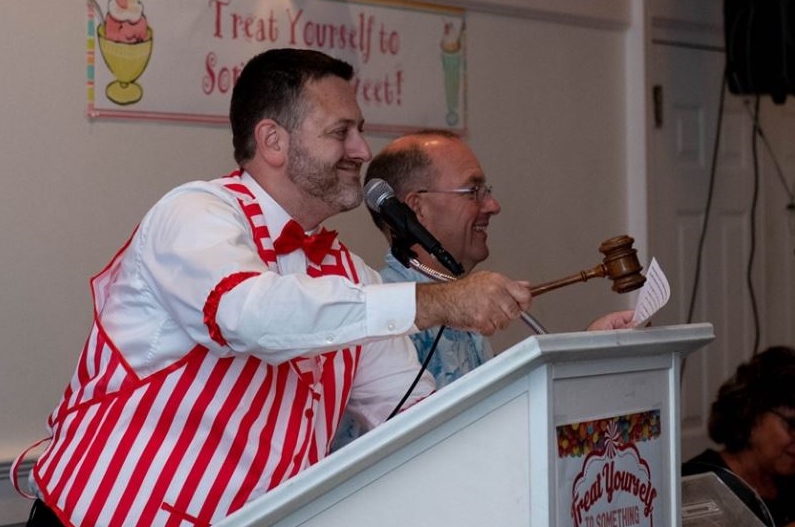 ROCHESTER - Nearly 300 seekers of fame, fortune and a Harley Davidson motorcycle descended on the Governor's Inn on Friday for the Greater Rochester Chamber of Commerce Annual Raffle Bash.

Emceed adroitly by Matt Beaulieu of Service Credit Union, the event, titled, "Treat Yourself to Something Sweet," featured a reverse raffle in which the 320 numbers displayed on a projection screen go dark one by one till just one is left, who chooses between a brand new Harley Davidson Low Rider or $10,000 cash.

The Governor's Inn beautifully decorated ballroom and patio were both filled to overflowing with eventgoers who enjoyed a sumptuous buffet that included pasta and garden salads, several pasta dishes, chicken breast strips and savory sautéed vegetables. For dessert a sundae bar was set up with all the fixins'

An addition this year was the chance for raffle losers to get a shot at second-chance prizes that included Red Sox tickets and a pass on the Downeaster Amtrak train or gift certificates to several of Rochester's fine restaurants. Some of the 26 second-chance

prizes were valued at more than $400.

There was also a liquor basket and scratch ticket raffle as well as a "Guess that Candy" contest.

The Raffle Bash, a major fund-raiser for the Greater Rochester Chamber of Commerce, was made possible by a host of sponsors including major underwriter D.F. Richard Energy.