With Blizzard Bag Days, the snow piles up, but not the dreaded June make-up days 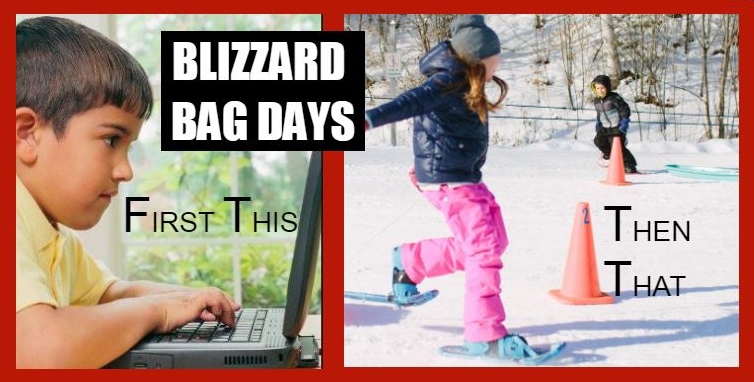 Blizzard Bag Days lets kids do their work and then still have time to enjoy the snow. (Courtesy photos)

ROCHESTER - Rochester Schools are one of the few New Hampshire cities and towns that have adopted Blizzard Bag Days, but Superintendent Kyle Repucci said so far students, teacher and administrators seem to all be on board with the innovative, Internet-driven program.

Blizzard Bag Days are the moniker given a program that allows students and teachers to stay home when school is canceled due to snow and complete class assignments online rather than have a snow day tacked on at the end of an academic year.

"It's still in development, but so far we've had very few complaints," Repucci said on Tuesday.

Repucci said Rochester Schools instituted Blizzard Bag Days last winter, but only used it one day since there were so few storms.

The logistics in Rochester work like this: The first snow day of the year is like the typical old-fashioned type where students and teachers stay home. After that the next three snow days are Blizzard Bag Days where students do work online and teachers are online to help them if they need it. Assignments are given out, completed and returned by email.

There are no quizzes or tests on Blizzard Bag Days.

Students have some skin in the game, too, because if 80 percent don't complete the classwork assigned, it doesn't count as one of the 180 required school days necessary during an academic year. That means they have to make up that day in June, which no one likes, said Repucci, who added that the 80 percent participation required was met the one Blizzard Bag Day they did have last winter.

He added the program is still in development and could be tweaked down the road and is being implemented throughout all Rochester Schools from grade school on up.

Blizzard Bag Days were first adopted by the New Hampshire Department of Education in 2014, but the program has been somewhat slow catching on in the Granite State.

The Kearsarge Regional School District - where they get a lot of snow days - was the first to use it in 2009.

None of the schools in the Greater Rochester area including Dover, Milton, Dover or SAD 60 in North Berwick, Maine, currently use the program.