With everything from Pong to Playstation, owner looks to attract an array of gamers

Special to The Rochester Voice 8 a.m. 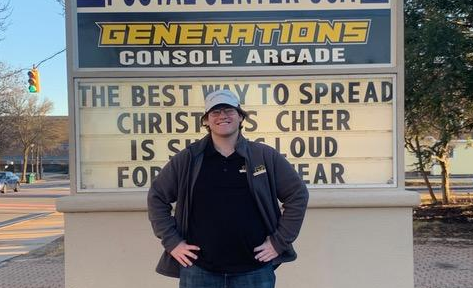 Owner Matthew Albion, who hopes to have his Generations Arcade open later this month. (Courtesy/James Albion)

ROCHESTER - There is a new game in town, and it's Generations Arcade, opening later this month behind Postal Center USA on South Main Street.

Not your typical arcade, Generations is a 5,000-square-foot console arcade, featuring console gaming like Wii, PlayStation, Xbox and Atari in its main room.

Behind the Main Room are two Virtual Reality rooms featuring the Oculus and some pinball and arcade games.

Also within the facility is an area for non-video games such as Foosball, DnD, Pokemon, Air Hockey, Rod Hockey and a lane for indoor Cornhole. The owner, Matthew Albion, and his dad, James, say they expect to add a snack bar soon.

The business concept was conceived by Matthew Albion, 17, who said the opening was delayed due to COVID lockdowns.

"I've been working on this plan with my Dad for a couple years," he said on Thursday. "We had hoped to open last year, but the lockdowns discouraged us. Now that lockdowns are a thing of the past, we felt kids of all ages could use a place to go to have fun and socialize together."

Matthew said he hopes to have Generations Arcade open later this month. They will also be celebrating a grand opening on Presidents Day weekend.