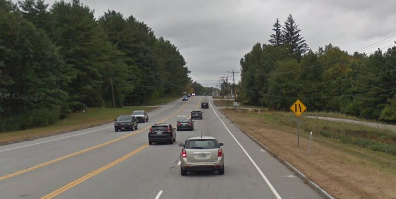 EASIER SIGNED THAN DONE: A merge sign instructs motorists just prior to Route 11 reducing to one lane. (Google Earth photo)

ROCHESTER - Motorists headed west on Farmington Road just off the Exit 15 interchange face what could be the most contentious merge lane in the Lilac City, exemplified by a recent road rage incident that involved gunplay that could lead to charges, according to Rochester Police.

With the Thanksgiving and Christmas season at hand, the tumult of holiday traffic will surely get worse with shopping at The Ridge and increased traffic to the Lakes Region, but police say no matter what any road rage provocateur does, no matter where in the city, don't engage.

Pull over and call police,

"Don't risk putting yourself or anyone else in danger," Rochester Police Capt. Todd Pinkham said on Monday.

The incident police are still investigating occurred on Nov. 8 around 5:15 p.m. in the area of Little Miss Sophie's restaurant where two lanes merge when heading toward Farmington on Route 11.

"It was reported during the incident the driver of a Subaru pointed a gun out the window as he was passing and cutting in front of the other vehicle," Pinkham said earlier this month.

A reporting party told dispatch that the offending vehicle was driving erratically prior to the alleged gunplay.

After speaking to all involved parties police say they continue to mull possible charges.

Just a day later on Nov. 9 another road rage incident was recorded at Home Depot, where a female called dispatch to say she was followed by a man who confronted her as she parked her car and began screaming at her, including that he had a gun though he reportedly never showed it, say police, who counseled both on proper driving conduct.

66% of traffic fatalities are caused by aggressive driving (NHTSA)

Road rage has been responsible for about 300 deaths since 2013. (NHTSA)

Over a seven-year time period, more than 200 murders and 12,000 injuries were attributed to road rage. (American Automobile Association)

Rochester Police suggest the following tips for staying safe during the holidays.

The number one rule with any travel is to not drink and drive or drive impaired by any type of medication and/or drug.

Plan your travel route and departure time ahead of time. For the Thanksgiving holiday, try to avoid traveling during peak travel hours (between noon - 8pm Wednesday and between noon - 3pm Thursday) and give yourself plenty of time.

Avoid engaging in any type of "road rage" type incident. With frustrations possibly resulting from increased traffic or crowded shopping, remember to stay calm behind the wheel and follow/obey all traffic laws.

If someone is not pleased with your driving, whether or not it is really their fault, do not engage in any verbal or physical confrontation with them. Allow them to pass or merge, don't tailgate them, and give yourself plenty of space. If they choose to engage you in anyway, pullover and call the Police. Don't risk putting yourself or anyone else in danger.

RPD wants all travelers to get to their respective destinations safely and enjoy their holidays.