With ROH's 'The Full Monty', rest assured: 'Everybody gets what they want' 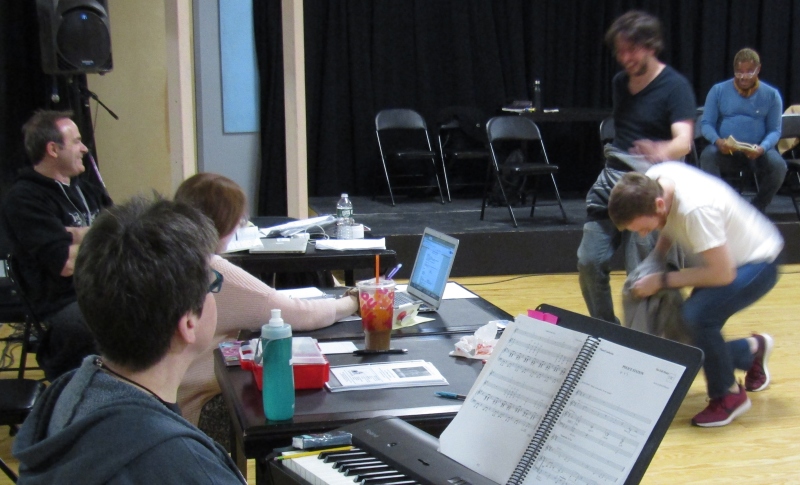 ROCHESTER - Tomorrow night six guys will be putting it all on the line when the Rochester Opera House presents the widely acclaimed and much anticipated The Full Monty.

Most everyone knows that the play is about six men who are desperate to make ends meet after being laid off from the local mill, who concoct a plan to hold a one-night-only Chippendale-esque striptease and manage to pull the whole thing off.

But what many don't know is the idiom "The Full Monty" doesn't translate to full nudity, but doing "whatever it takes" to getting something done.

And ROH Executive Director Anthony Ejarque, who is directing the play, himself, said this cast is going "The Full Monty" to make this play a success, and they have the credentials to prove it.

"This cast may be the highest caliber of any I've work with," said Ejarque on Monday. "The talent level is huge, all I have to do is give them a costume and they're ready."

During a recent rehearsal at the Rochester Performance and Arts Center many in the cast were actively giving input on possible adlibs that could enhance the performance, all welcomed by Ejarque.

"I tell them 'give me everything you've got in the way of suggestions' and let me work with them," he added.

Included in the cast are Jonathan Acorn and Billy Butler, who both recently performed in the Dolly Parton Smoky Mountain Christmas at the Colonial in Boston; John Lathan of Palm Springs, Calif., who has played on Broadway and TV and was an original on the TV Kids Show Zoom; and Scott Severance, who has his own production company that tours the country and has played often on the ROH stage.

Rounding out the cast are Tomer Oz and Cameron Torres.

While the cast and crew are incredibly strong (Music director Kathy Fink, Stage manager Grady Savage), Ejarque said the theme of the play is tried, true and trenchant.

"This is something anybody can identify with," he said. "I mean look at Rochester, a former milltown that lost so many jobs. We know what it's like to go through tough times. This show has something for everybody. Everybody gets what they want!"

"There's comedy, drama and lots of music with a five-piece band," he added. "This show is fun. This is American storytelling at its best."

The ROH will be in table seating mode with the floor down and a full bar as well as a "full monty." They'll even be serving desserts.

The Full Monty opens on Thursday and then runs Friday through Sunday for three weeks with its final show Jan. 26.

The Full Monty is sponsored by AARP New Hampshire and The Rochester Voice.