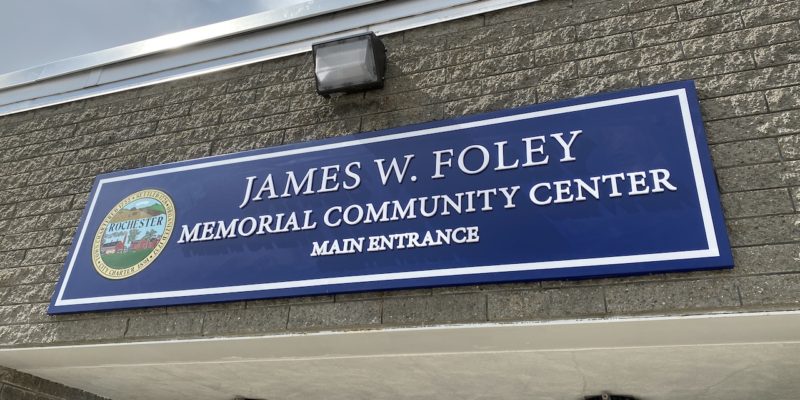 ROCHESTER - The Rochester Community Center's renaming in honor of slain journalist James W. Foley became official last week as a blue and white sign with the city's seal was raised on the main Wakefield Street entrance.

The City Council approved its renaming to the James W. Foley Memorial Community Center at its regular April 6 meeting during which Mayor Caroline McCarley announced that a formal ceremony will be held on May 4.

The Community Center has seen substantial upgrades and renovation over the past several months and beginning today will be the new home of the city's tax office.

Foley's mother, Diane Foley, who lives in Rochester, has been a tireless advocate for protections for journalists after her son was killed by Isis militants during a videotaped beheading in August of 2014.

In 2018 James Foley was awarded the Life and Liberty Award during a ceremony at the New Hampshire Supreme Court in Concord.

Foley, a freelance journalist and war correspondent, was beheaded by ISIS after nearly two years in captivity in northern Syria. The James W. Foley Legacy Foundation was created the same year by his family to improve the safety and treatment of independent freelance conflict journalists, to advocate for the safe return of Americans kidnapped abroad and to improve U.S. hostage policy.

Diane Foley said the family was thankful for the renaming.

"Our entire family is so deeply honored by the City of Rochester to have Jim remembered in such a meaningful way," she said.