Witness: Murder suspect was heavy user of DMT, cocaine in weeks prior to killings 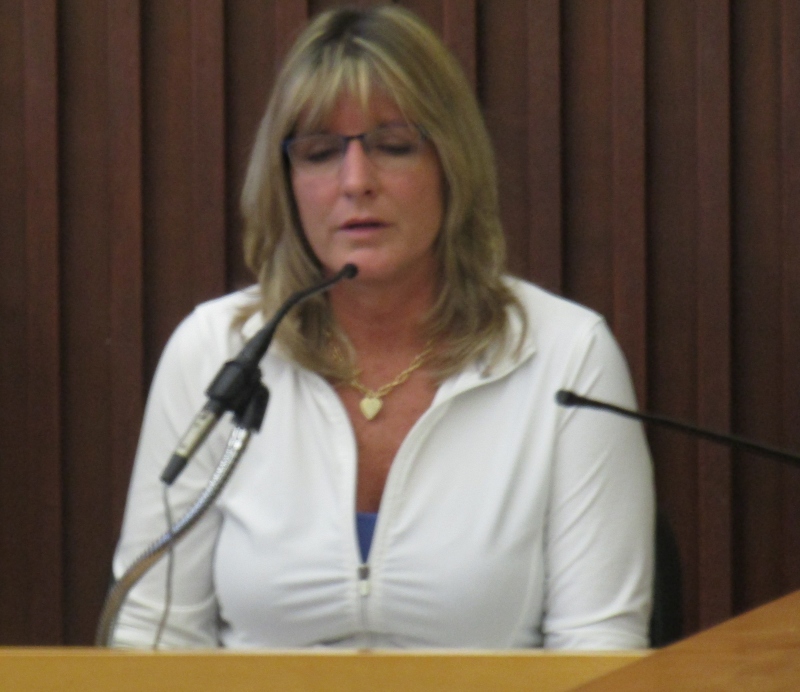 DOVER - The murder suspect in the double homicide of two women in Farmington told a friend about a month before their deaths that he was having "dark thoughts," had become "paranoid" and was doing a lot of drugs.

Under questioning from Assistant Attorney General Jesse J. O'Neill, Kathie Elder Bradstreet told jurors her friend, Timothy Verrill, appeared to be increasingly agitated and on a downward slide as he became a heavy user of both the hallucinogenic drug DMT and cocaine.

Verrill, 37, of Dover, is charged with first-degree murder in the deaths of Christine Sullivan, 48, of Farmington, and Jenna Pellegrini, 32, of Barrington, who were both slain in the morning hours of Jan. 27, 2017, in Farmington.

Bradstreet, who said she was close with Sullivan, admitted she often did drugs with a group of friends at the 979 Meaderboro Road where Sullivan lived and was also friends with

Verrill, who much of the group knew as "Timmon."

Bradstreet said she knew Verrill to be a "good man," but that his behavior had become increasingly disturbing in January 2017, however two weeks or so before the killings he told her he was getting more sleep and getting better, Bradstreet testified.

Meanwhile, Bradstreet told the court that the relationship between Sullivan and her longtime boyfriend, convicted drug dealer Dean Smoronk, formerly of both Farmington and Cape Coral, Fla., had gone from bad to worse.

She said Smoronk was prone to send his girlfriend and co-conspirator in their drug business "vile" text messages and that there was a lot of name calling and negativity between the two.

Bradstreet said she had known Verrill since 2009 and that he took care of the Meaderboro Road property and their drug enterprise by selling cocaine for them on a regular basis.

Bradstreet, who had tentative plans with Sullivan for the Jan. 27-29 weekend, said when she called midweek, there was no answer, no call back and return texts.

On Friday (Jan. 27) evening she called Smoronk and told him Sullivan couldn't be reached.

She said Smoronk answered that he had recently called her and she shouldn't be out of touch and that they had exchanged, "Love yous."

Bradstreet thought Smoronk was in New Hampshire, so she texted at 10:09 p.m. "Where are you?"

Smoronk replied by text about a half hour later, "Fuck!"

The next day, Saturday, Bradstreet testified that she finally got a hold of Verrill, who told Bradstreet he had changed his phone number cause he "was trying to turn his life around."

She testified she spoke to Verrill about where Sullivan was, and Verrill told her he went up to the house to check their welfare but his "security thumbprint" didn't work at the door. She said he then got in and saw Jenna's and Christine's purses, but didn't go all the way in.

Later in the afternoon, around 4:50 p.m., she said Smoronk told her he had booked a flight to return to Farmington to see what was going on.

Under cross-examination from defense attorney Meredith V. Lugo, Bradstreet testified the last time she was with Verrill he "seemed fine."

Bradstreet also said Verrill had lived at the Meaderboro Road home with Sullivan for a few months several years ago, that they had a good relationship and that he helped her move stuff for her home business in which she sold items online.

Following Bradstreet was witness Stephen Clough, who said he regularly sold and used crystal meth supplied to him by Smoronk and Verrill.

Clough said he was more friendly with Sullivan than Smoronk. He said that in December 2016 he had been "shut off" by Smoronk and was buying directly from Sullivan without Smoronk's knowledge.

Clough testified that in mid-January 2017, he was helping Sullivan to ultimately move out of the Meaderboro Road house.

It was Clough whom Smoronk dispatched on Saturday, the day after the killings, while still in Florida to go check on his longtime girlfriend's welfare.

Clough testified he took a couple of friends and a couple of handguns - a Glock and a Ruger - with him for the task.

He said they arrived around dusk and testified that a female waited in the car while he and another friend - Buddy Seymour who has since passed - went into a recently spray painted garage near the residence.

Under authorization from Smoronk, Clough testified he and Seymour then broke into the house, ultimately making their way to Pellegrini's bedroom where they found all of her bedding removed and a large pool of blood on her mattress.

"We had just made up that bed for Jenna in the previous days," an emotional Clough recalled. "After I saw the bloodstain on the mattress I was trying to catch my breath and feeling freaked out; that was the last thing I wanted to see."