Woman charged in April motorcycle crash turns self in 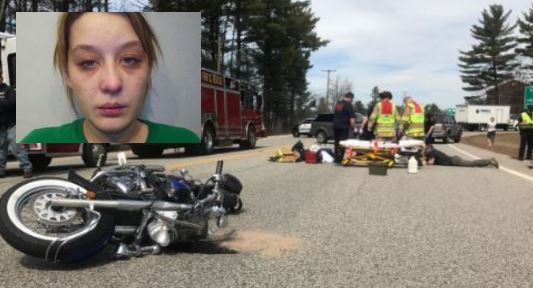 Scene of April 10 accident on Milton Road; inset, Amanda Anderson, who was charged in the collision. (Rochester Police photos)

ROCHESTER - The woman said to have caused a horrific motorcycle accident last April turned herself into Rochester Police on Thursday.

Amanda Anderson, 28, of Cormier Drive, was charged with Class A vehicular assault, which qualifies as a major motor vehicle offense in terms of habitual offender consequences if convicted.

The April 10 collision occurred when 56-year-old Donna Smith of Rochester was riding her 2002 Suzuki VL800 north on Milton Road in the area of Dunkin' Donuts around 12:30 p.m. when it was struck by a 2000 GMC Yukon, operated by Anderson, according to police.

Police say it appeared that Anderson crossed the center line as if she were making a U-turn.

The accident drew a swift response from Rochester Police, Fire and Frisbie EMS, who found Smith lying in the road surrounded by motorcycle debris.

Lifeflight of Maine, which had just begun servicing the region out of Sanford, Maine, in March, was on the scene "very rapidly," noted then Rochester Fire Chief Norm Sanborn. Smith was Medflighted to Maine Med for treatment, and spent several days in critical condition before being upgraded.

Anderson's arraignment is scheduled for next month.