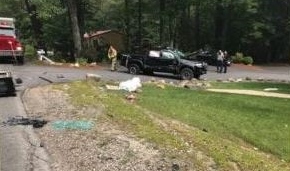 ROCHESTER - A Barrington woman was injured in a collision on Washington Street on Friday.

The crash occurred when Robert Gagne, 69, of Manchester, back his 2006 Saturn Ion out of a driveway and into the path of a 2017 Toyota Tacoma, being driven by Lisa Hollis, 54, of Barrington.

The collision caused the back Tacoma to roll over.

Hollis was taken to Frisbie Memorial Hospital with what were described as nonlife threatening injuries.

Gagne was given a summons for failing to yield.

Both vehicles were towed from the scene.