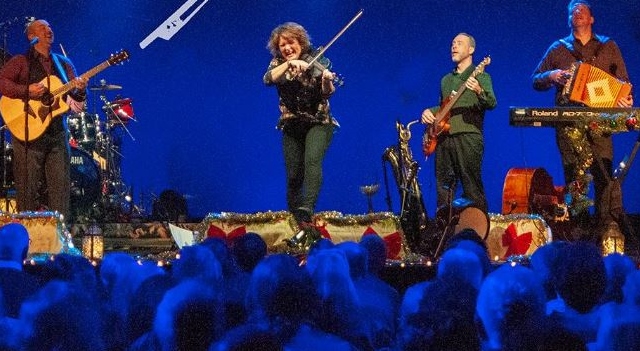 NYACK, N.Y. - With a resume as broad and powerful as violin virtuoso Eileen Ivers, it's hard not to begin an interview with this stunningly talented woman without commenting aloud and in awe as this writer did, "Wow! You've done it all."

"Well, I like to fiddle around," she quips without missing a beat in epically self-deprecating fashion. But if Tom Bodett has truly been to every Motel 6, well, Eileen Ivers has fiddled on every stage, before presidents and royalty, with famous symphonies and rock groups the world over and yes, on Saturday, Nov. 30, at the Rochester Opera House.

On Monday she took time out to talk to The Rochester Voice from her Nyack, N.Y., home, a stone's throw from the Bronx, where she grew up in the 1970s with her Irish-born parents.

She began playing the violin at the age of 8 under the tutelage of Irish fiddler Martin Mulvhill; before long she was touring with his band.

Ivers' renowned violin playing has taken her all over the world and through nearly every genre of music. She has played as guest musician at Carnegie Hall, with the Boston Pops and more than 50 orchestras across the globe.

She's been called a "sensation" by Billboard magazine and "the Jimi Hendrix of the violin," by The New York Times.

Her Rochester appearance will feature her five-member band playing some 20 instruments, traditional Irish ones like the bodhran, an Irish drum made from goatskin.

Ivers said on Monday her music on Nov. 30 will be all about the joy of the Christmas season.

"Through music we'll paint a picture of the season by telling the Christmas story," she said. "The music is heartfelt and joyful and will include two poems that I recite."

She said her music is "based in Irish traditional music but incorporates American and African roots."

Deeply devoted to her Irish heritage and roots music, Ivers toured with the theatrical Irish music sensation Riverdance in the late '90s, but has found ample opportunity to explore other genes, like playing with pop stars Hall and Oates and punk rocker Patti Smith among others.

She also performed on movie scores for The Gangs of New York and Back to Titanic.

One of her most memorable and emotional cooperative efforts was with Patti Smith, with whom she worked on her Gone Again album. The title track was inspired by the death of Smith's husband, guitarist Fred "Sonic" Smith of a heart attack in 1994.

"Patti and I recorded the title track of Gone Again, but the song lyrics had so much angst - it was about her husband - so I asked her if I could use my 'cry baby wah pedal.' It gave it a more of a grieving sound. Afterwards she told me that was what it needed."

Ivers pre-eminence on the violin and fiddle has not only been appreciated by critics and crowds worldwide, but proved on the competitive stage. Beginning at the age of eight she won nine All-Ireland fiddle championships, a tenth on tenor banjo and more than 30 championship medals in all.

She said she's looking forward to a foot-stomping celebration of the Yuletide season when she brings her band, unIVERSal roots, to the Rochester Opera House.

"We want to bring audiences into the heart of the season and the intrinsic joy that is the meaning of it all," she said.

To watch a video of her band click here.

For tickets to the show at the Rochester Opera House click here.