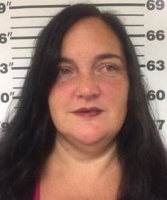 NEWINGTON - A Maine woman was arrested for DWI on Sunday after she was spotted going the wrong way on Interstate 95 in Greenland.

Theresa Ronco, 47, of South Portland, was arrested after police say she was seen driving her SUV north on the southbound side of the interstate a little after 3 p.m.

Dover tollbooths prohibited all southbound traffic until New Hampshire State Police were able to pull Ronco over as she neared the Dover tolls.

Ronco was arrested and charged with aggravated DWI and reckless conduct. She was released on bail pending an arraignment later this month.

Anyone with information about this incident is asked to contact New Hampshire State Trooper Peter Sankowich at (603) 679-3333 or Peter.Sankowich@dos.nh.gov.