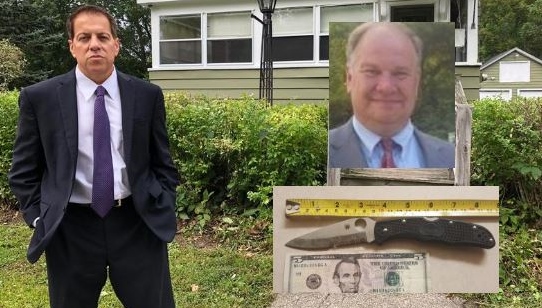 Dover Attorney Alfred T. Catalfo in front of the Nye Street duplex where Mike Burns was fatally shot. Inset, Mike Burns and the knife which he allegedly used to threaten a woman and the shooter. (Courtesy photos)

ALFRED, Maine - One week after State Police said the Attorney General's Office had closed the Mike Burns death case and a year after he died in a volley of gunshots inside a Saco duplex, the York County District Attorneys Office is reviewing the case for possible charges, a lawyer for Maine State Police told The Rochester Voice today.

In response to an official Freedom of Information request from The Rochester Voice last week, Christopher Parr, a staff attorney for Maine State Police, denied the digital daily's request for information regarding the case, which would've been available if the case were officially closed, safety officials have said.

State Police Spokesman Steve McCausland had last week directed The Rochester Voice to send the FOIA request to him, which prompted the email from Parr.

Burns died early the morning of Sept. 30, 2017, after he was shot in self-defense by the tenant at 26 Nye St., in Saco, say police, who believe Burns had gone to the address in response to a Craigslist ad for sex.

Police say after a woman he'd paid $100 reneged and another man told him to leave, Burns became enraged, retrieved a utility knife from his truck and threatened the woman. Police then say another man, the tenant, shot and killed Burns in self-defense.

Dover Attorney Alfred T. Catalfo is now representing the Burns family as they seek to find more answers about what really happened in Saco last Sept. 30. The family finds it inconceivable that Burns, a respected Boy Scout troop leader and self-employed computer technician, would become so enraged in a dispute such as police have represented that it would result in his loss of life.

It was exactly a week ago that McCausland said the Attorney General's Office had closed the case with no charges and State Police had ended their investigation.

Beyond protecting the integrity of the ongoing investigation, Parr said information would also be withheld due to privacy concerns for some of the principals involved in the incident the night of the killing.

The York County District Attorneys Office was not immediately available for comment.

Catalfo was also not immediately available.