You gotta raise the roof for these model railroad magicians 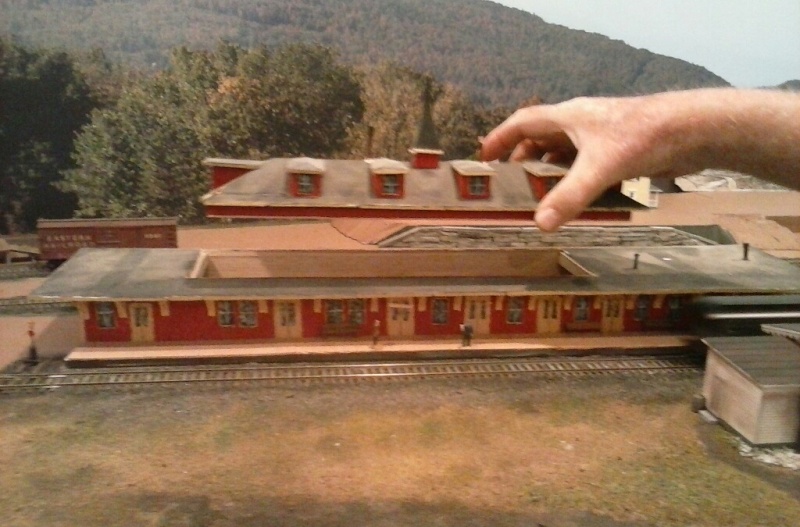 A second floor will soon be added to the Sanbornville station model. to more closely replicate its look in 1909. (Lebanon Voice photos)

UNION - Inside a restored freight house next to the former Union train station, a group of dedicated and passionate model railroad enthusiasts are making magic.

They're all volunteers and call themselves simply "The Crew," but what they have done is truly nothing short of remarkable, painstakingly replicating to the tiniest detail the Boston and Maine railroad line through Wakefield's five villages on a raised platform that horseshoes around the freight house's interior walls.

An HO scale locomotive with several cars traverses the track, often preceded by a camera-mounted car that gives viewers of a nearby video screen a fascinating, eerily realistic look at what B&M engineers saw when they were at the throttle of freight or passenger trains more than a century ago.

The portion of track represents some 30 miles, with the layout authenticated by Boston and Maine Railroad archives drawn from historical data housed at the University of Massachusetts at Lowell.

The Crew, which includes Ken White, Joe Santoro, Rich Breton, Tony Keegan, Bill Gaver and George Allen among others, took those plans and set about to replicate as closely as possible what passengers aboard the trains would have seen back in 1909.

That included building models of stations, freight houses, water towers, stores and businesses that existed along the line in 1909 to the same scale.

Many of the buildings still exist today, while others long since gone were lovingly built with the help of faded photographs and drawings.

Breton said on Sunday the crew had been working on the display for about three and a half years, coming into work every Wednesday and often taking work home with them throughout the rest of the week.

Breton, himself, built the replica for the North Wakefield station, also known as Mathews, explaining that some Wakefield stops had different names, so dispatchers and train crews could more easily communicate and understand track orders.

Most of the wood used to make the buildings is bass wood, which is easy to carve, Breton said. The Mathews stationhouse took some 200 hours to create, he explained, adding that every detail from rafters to the chimney to the chalkboard that listed train arrivals and departures on the outside wall were precisely crafted to scale.

Outside the stationhouse, also replicated exactly are the kerosene lamps, key box and butterfly signal used to stop trains.

The Sanbornville model station, which was very ornate and large, likely took 500 hours, Breton said, adding that the station at first was one floor, but later the roof was taken off and a second floor added.

Behind the diorama Breton designed a backdrop that seamlessly melds model structures to a background painted to stay true to the geography of the area.

To do that he took actual photos from the clock tower in downtown Sanbornville - about 90 - then stitched them all together.

"I edited out all that wasn't around in 1909, like air conditioners, then set up in a file on a computer," he said. "Then they were all printed in Rochester."

He said they came out in long sheets which were then applied using glue to the wall behind the diorama.

"Where it didn't blend I had painted it," he said.

An extra special treat for visitors is sitting in front of the video screen and watching the train chug slowly through the villages' stations from the camera affixed to the front car.

"It allows you to see details you can't see when looking at the model," Breton explained.

The model railroad and nearby Union station museum are all part of Heritage Park, which is run by the Wakefield Heritage Commission.