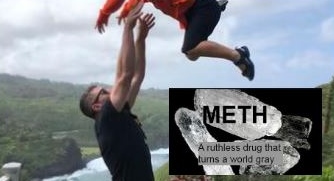 Nathan Cermelj gives his son a toss up in the air as they frolic on a recent day and he celebrates his 15th year in recovery. (Courtesy photo)

Editor's note: This is the third of our three-part series on the ravages brought by methamphetamine. Today, a user who beat the odds and now helps others who are addicted. Links to the other two stories can be found below.

SCARBOROUGH, Maine - Growing up in Cape Verde, Ariz., Nathan Cermelj was no stranger to recreational booze or marijuana, but it wasn't until he tried methamphetamine in 2002 that he went from casual weekend drug user to machete-carrying drug runner in the blink of an eye.

"I started in 2002 - I'd never done it before - and by the second use I was hooked," he said during a recent interview. "Tt was a great feeling, it gave me all the things I wanted: energy, self-esteem, I started shedding pounds. It was great for losing weight, an increased sex drive and it was cheap."

Carmelj quickly went from restaurant worker to glamorous drug runner, and he loved it at first, he said.

"It was a new lifestyle," he said. "I was making a lot of money, it was very exciting,"

Even though he never tried heroin, he's been around enough who have to know the highs they give users are as different as night and day.

"With heroin you don't want to do anything," he said. "With meth it's just the opposite. I sometimes stayed up seven or eight days, one time I stayed up nine straight days.

"Then you start getting in trouble with the law, mostly cause you're the only knucklehead out there at 1 a.m."

But Cermalj, who carried a machete on him at all times - because he did drug running with some bad dudes - said it didn't take long for it all to go south.

That's because meth floods the nervous system and penetrates the brain to produce a euphoric blast upon smoking or snorting it.

The drug forces the dumping of dopamine into the user, scrambling and rewriting the brain's reward and pleasure centers, and sowing the seeds for a painful addiction.

Meth is one of the most devastating and vicious drugs on the market. It derives its effectiveness from forcing the brain to pump out dopamine, the neurotransmitter that induces a sense of satisfaction from a job well done.

Meth is so powerful that it is instantly habit-forming, opening the door to long-term consumption.

Over time, meth actually destroys dopamine receptors in the brain, rendering users incapable of experiencing pleasure through any other means or source aside from the meth. Meth becomes the center of users' lives; their resources, time, energy, and focus are spent on getting meth.

"You get so all you want is to do meth," Cermelj said. "You don't pay bills, it gets weird."

He said it also brings out paranoia in users.

"You start to hear things, start hanging out in closets, you chain smoke, start to feel dirty and get totally out of touch with life," he said.

Cermelj said he may have never gotten off meth if he hadn't been arrested three times. That's about the only way he would have ever detoxed, he said.

The first detox was the worst.

"It was horrible: nightmares, sweats," he said.

But even when he was free of the drug physically after about a month, he said "the gray," the inability to find joy or fulfillment or pleasure without meth, stays with you a lot longer.

With meth the dopamine just pours in to your brain, so when you don't take it, when you detox, "it all goes gray, no laughter, nothing is fun," he added. "And it takes more drug to get high. Two days without meth you want to shoot yourself."

He said he tried to quit several times while spending time at a halfway house awaiting release from the Arizona prison system.

"I relapsed on marijuana and got called in for a drug test," he said. "Luckily I tested negative. Two hours later I was smoking meth, I did it two more times with no repercussions, but I knew I was headed back to being an addict."

Soon after taking it he was called in for another drug test, but again, miraculously tested negative.

Now Cermelj, clean for 15 years, is the director of Business Development for Liberty Bay Recovery Center in Portland.

He said getting rid of the gray was the hardest part.

"It's all about learning," he said. "You have to find a higher power, have a complete change on your attitude about life."